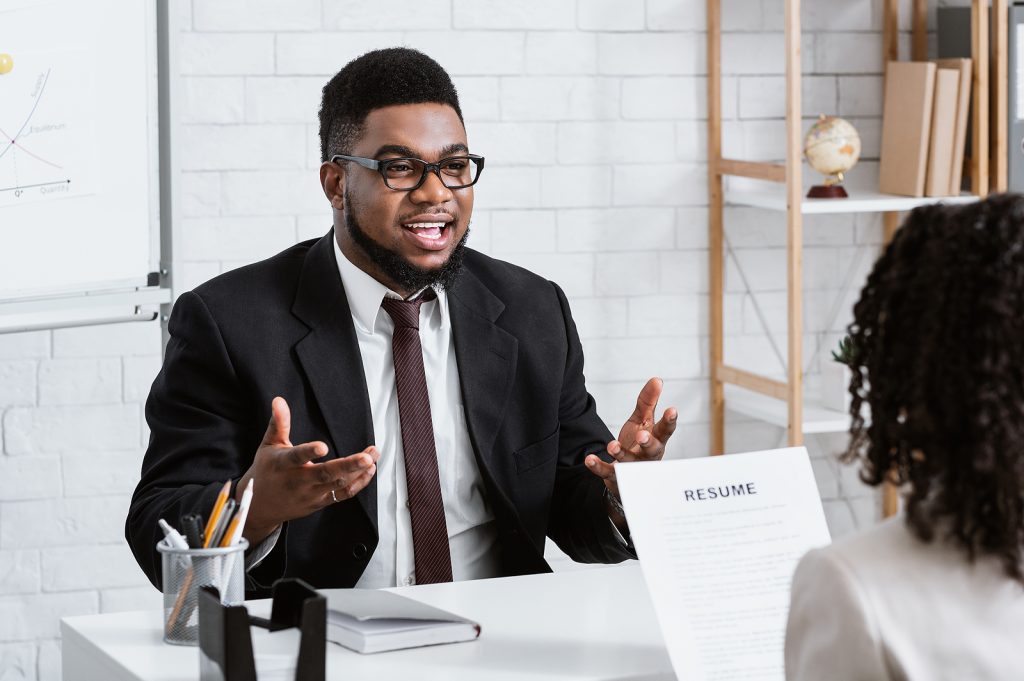 You’ve been asked to interview a candidate for an open position at your company. Maybe this is your first time as an interviewer or maybe you’ve interviewed countless candidates. In any event, you know that your interview skills could get sharper. You’re spending precious time away from your work and you’re helping make a decision that could shape the future of your company or department. But how do you make the most out of the 30 or 60 minutes you have with each candidate? We’ve got you covered! Read on for a step by step guide to inclusive interviewing.

Step One: Determine What Skills are Needed

Why: We all want the perfect hire — someone who has already done every single thing they’ll need to do in the role and more. Moreover, they already live in your backyard and will work for acorns. In recruiting, we sometimes call this candidate “the purple squirrel.” (Source) Because, let’s be honest, just like a purple squirrel, the perfect candidate probably doesn’t exist. What we really need is a candidate who has the skills to get the job done and the proven ability to grow. Step one is determining what those skills are.

How: Think about what the new hire in this role will be expected to do in their first month on the job. From soft skills like managing a team to hard skills like coding in a certain language, there are certain skills that, depending on the role, the right hire must have on Day One. But there are likely other skills listed on the job description that the right hire could learn on the job.

You don’t want to lower the bar for candidates to the point that you’re setting them up to fail in their first month on the job, but you also don’t want to raise the bar so high that you waste months looking for the perfect candidate who simply does not exist.

Review the job description and identify the top 5 or 6 skills that are actually needed for the role. As you go through each requirement in the job description, differentiate what skills are necessary for a role’s basic functions and what can be learned over time. Other than testing for ability to learn new things, your questions should focus on testing for the skills that are actually required.

Why: Once you’ve determined what skills are truly necessary for success in the role, it can be tempting to make assumptions about which candidate has those skills based on their resume alone. Unfortunately, 74% of employers admit to making a bad hire. (Source) Why? Like many interviewers, most of them probably made hiring decisions based on faulty assumptions. For example, assuming that a degree from a top university ensures that a candidate has certain skills covered.

How: For each skill, ask yourself how you would evaluate it if you didn’t have a candidate’s resume. When possible, base your questions on actual scenarios they will likely encounter in the role rather than simply relying on questions about past performance. For example, instead of asking “Tell me about a time you managed conflict within a working group” you should ask “How would you manage conflict within a working group?”

As you think through your questions, try to use clear language. Many interviewers try to trick candidates or show off their own intelligence by filling their questions with acronyms and jargon. Candidates often try to do the same. But knowledge of an acronym or certain buzzword should not be conflated with knowledge of the actual process or skill behind the jargon. Instead, it can be associated with insider status, something that candidates from underrepresented backgrounds are less likely to have, even if they possess the underlying skills.

Additionally, try to craft questions that will lead to quality responses and cannot be answered with a simple “yes” or “no.” Likewise, make sure your questions don’t lead candidates to the same answer or confuse candidates with excessive filler. Questions should be 2-3 sentences max.

Step Three: Decide What a Strong Answer Looks Like

Why: It is so hard for humans to unlearn our biases. Despite our best efforts, we often bring these biases into the interview process and end up building teams that lack the diversity we claim to desire. One study in particular explains how this bias shows up and why it’s so important to decide in advance what a strong anwer looks like.

With just a simple instruction, a massive gender bias was completely eliminated. This is why it’s so important to decide what a strong answer will look like before you start to interview candidates. In doing so, you make a declaration about what is truly important in a role and use that criteria, instead of biases about what the right hire will look like.

How: Ask yourself or a trusted colleague each of the questions you crafted in Step Two. Record what you like about the answers and anything else you’d like to see. Likewise, write down responses that may be a red flag that the candidate actually doesn’t possess the skill you’re testing for.

You’ll also want to choose a rating system to rate answers. This will help you more easily compare between candidates at the end of the process. We love a five-point scale at JobSage because it enables a bit more nuance in your ratings, but you could also use a three-point (good, neutral, bad) scale if that’s easier.

At this stage, you’re starting to compile a lot of information that will inform your interview process. To keep organized, you should consider creating a spreadsheet that tracks each question, what a strong answer looks like, how each candidate actually answered the question, and the score you gave for each response. It isn’t as overwhelming as it sounds! Most importantly, it’s an investment in a much smoother, more effective interview process.

Why: You’ve done it! You’ve identified the most important skills for the role, you’ve crafted questions and sample answers to test for each skill, and your spreadsheet is ready to go. Now it’s time to meet the candidates. Unfortunately, this is also the time when some interviewers forget to bring their questions and fall back on casual conversation.

Sure, you want to hire someone you’ll get along with and it can be uncomfortable to feel like you’re grilling a potential future coworker. But you must stick to the script, with every candidate. Otherwise, you are more likely to waste time (yours and the candidate’s), ask inappropriate, potentially biasing questions (“I detect an accent. Where are you from?”), or make decisions based on affinity (“You like the Lakers? Me too!”).

How: The easiest way to follow the script is to print out a fresh sheet of your interview tracker before each interview. Write the candidate’s name at the top and let them know that you’ll be recording a few notes throughout the interview. You don’t need to write their answers verbatim, just include enough detail (think: a few words or bullet points for each question) that you’ll be able to go back and score it after the interview.

This might seem strange at first but as soon as you explain why (“We want to create a more inclusive interviewing process”) top candidates will love it. They’ll know that you’re not going to waste their time making small talk or asking questions whose answers you could have found in their resume or cover letter. Moreover, they’ll know that they’re being evaluated fairly and not based on characteristics that are irrelevant to success in the role. Whether they get the offer or not, the candidate will feel good about the process and maybe even refer their friends.

Why: Hiring is risky. You are bringing on a new person who might elevate your team to the next level or drag the whole team down. You know you want to diversify your team, but in the face of this risk, it’s easy to make decisions based on what’s always worked in the past.

“In some ways people who have been successful in roles in the past become a prototype or reference point for success in our minds,” says Siri Uotila, a research fellow at the ‎Harvard Kennedy School. “If the majority (of people who have already been successful in a role) have been white men, then it is more difficult to actively diversify.” (Source)

But with this step by step guide, you’re prepared to make smarter, data-driven decisions. Following this guide, you’ll begin to evaluate candidates based on their ability to succeed in the role, not their similarities to the people who have already succeeded in the role. As a result, you’ll see that candidates from more diverse backgrounds are getting further in the interview process. Happily, you’ll have given those candidates a great experience which will make them more likely to accept an offer. Outcome? A stronger, more diverse team.

How: Following the steps above. You’ve got this! We’re here to help.